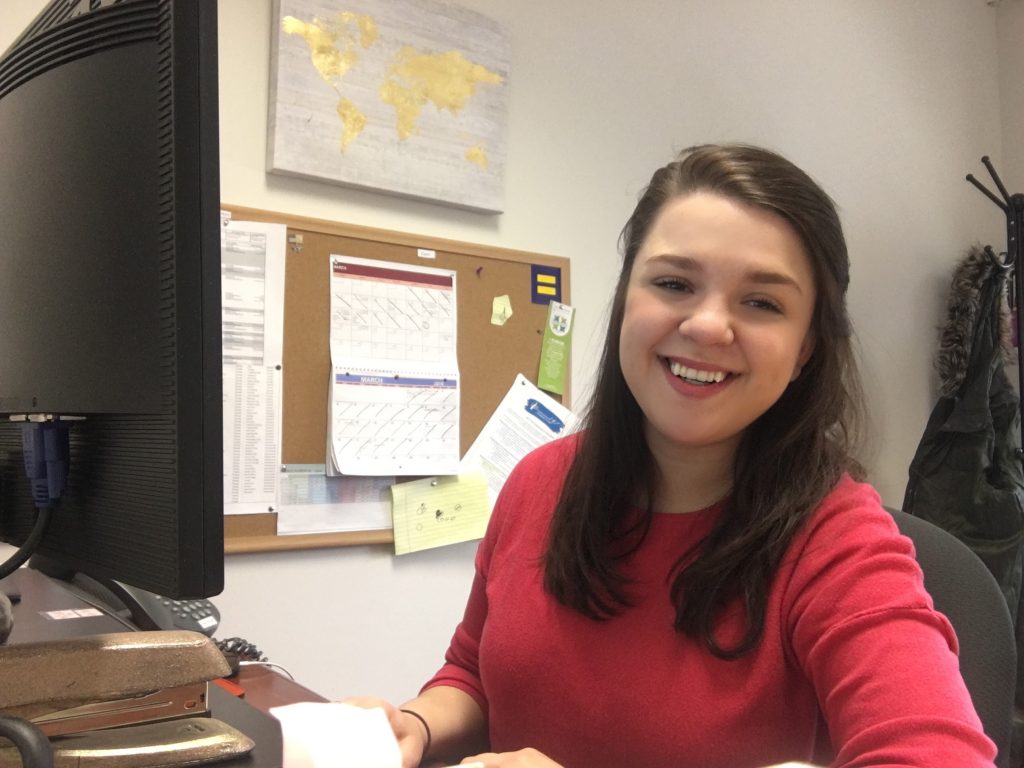 As Director of Operations for U.S. Congressman Sean Patrick Maloney (D-18CD), Paige Banfield is realizing her career goal to work in public service. Now employed at the Congressman’s district office in Newburgh, Paige is responsible for handling a host of constituent issues ranging from district events and press conferences to overseeing the Congressman’s busy internship program.

At age 24, she is learning the nuances of her chosen profession. With a ringside seat to one of the greatest shows on earth right now, Paige sees the United States Government at the federal and local levels. “I’m seeing policy and politics unfold firsthand every day,” she explained.

Many of the topics may also come with the added perspectives of a father who is also highly engaged in the public discourse. Her dad, William Banfield, serves as the New York regional manager of Carpenters Union Local 279, which serves 2,350 members and 1,248 signatory employers throughout the Northeast Region. His dedicated example could be a key to Paige’s interest in public service.

It has been a steady journey, originating in high school, where she was committed to her school’s chapter of Amnesty International. She served as vice president and later, in her senior year, as president.

“I always had strong opinions, especially when it came to women’s rights and human rights,” the Brewster resident recalled recently. “I was fortunate to have a group of friends with whom I was able to engage in such discussions and express different ideas.”

This experience led to her first role in the field—a 2015 college study abroad program in London where she took part as an events intern at the International Centre for Parliamentary Studies. Paige worked on such diverse issues as domestic violence, hours of operations of drinking establishments and the future of libraries.

“I knew Congressman Maloney’s name through his relationship with the Carpenters Union and it resonated with me,” she said. “But I also admire his other work, including his involvement with education, the opioid crisis, and most personally, his work advocating for research into Lyme disease, which I have battled myself.”

A 2016 college graduate from Bucknell University, Paige was named a scholarship recipient of a $3,000 grant from the Construction Advancement Institute of Westchester & Mid-Hudson, which helped with books and tuition.

“The scholarship gave me the opportunity to explore different areas of study,” she recalled. “Bucknell allowed me to take courses in a number of fields. That was how I found my passion for political science and political theory.”

Currently working on a project that recognizes Girl Scout Gold Award recipients of the district, Paige is coordinating the awarding of certificates of congressional recognition and a letter of congratulations signed by Rep. Maloney. She said that the office regularly recognizes Eagle Scouts, so “it’s exciting to now recognize young women who are so incredibly dedicated to the community.”

Reflecting on her path to public service, Paige said her parents were strongly supportive.

“My mom always reminds me that ‘nothing is set in stone’ which is advice I pass on to interns whenever they’re uncertain about their future decisions,” Paige said. “It’s the advice that gives me the courage to go out and try things, professional or personal.  If it doesn’t work out, or I find it’s not for me, then that’s OK.”

Encouragement is a key that opens the door of opportunity. In reflecting on her advice to students seeking their own path, Paige said she’s a strong believer in following dreams, no matter what others think.

“The world is filled with incredible opportunity, so why limit yourself?” she asked. “Take risks, be creative, have role models, but always be true to yourself.”

And if you find you don’t like it or it wasn’t meant for you? “Take mom’s advice. Nothing is set in stone. Find what makes you happy,” she related.