When Andrew Exner graduated from TriValley High in Grahamsville, NY in 2013, he already knew the career path that would lead him to his dream niche. In 2015, Andrew traveled to New Orleans and other areas of Louisiana to help the rebuilding of areas ravaged by floods. That’s where he saw firsthand the good the building trades brings to the lives of those in need.

“I helped build a ho 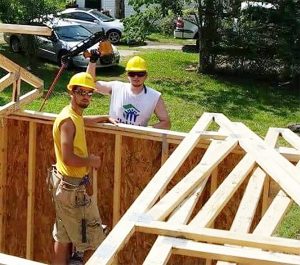 use for Habitat for Humanity and a parish church for a parochial school in New Orleans,” Mr. Exner said. “It was so satisfying to know you can make a difference in someone else’s life.”

Thinking back, the tree house he built for himself as a kid may have been a footing for his future calling. “That house was so much fun, and in the process I discovered I liked building things with my hands and being outside,” the 21-year old recalled.

While in high school, Mr. Exner attended the Construction Career Day at Rockland Community College sponsored by organizations that include the Construction Industry Council and the Building Contractors Association. With more than 20 exhibitors, Construction Career Day introduces high school juniors and seniors to career possibilities in the building trades, from carpentry, plumbing, welding and electrical work to bricklaying and other trade work. It also gives kids a sense of the financial stability and loyalty that a steady job in the trades can afford them.

“That’s when there was something like an awakening that took place,” Mr. Exner remembered. “I realized then and there that there was more to life, more to building, and that I could get closer to the work I wanted to do. I could go outside and build stuff using my two hands,” he said. “It was an important moment for me. I felt like I had just been given permission to do something I really wanted to do.”

He said the field trip to Construction Career Day also revealed the variety of opportunities within the building trades. The building industry was bigger an 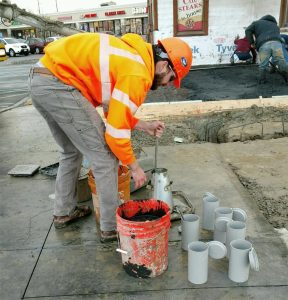 d more diverse than he expected, he said.

“Having all the different unions and companies represented there made it easy to ask questions and to see what was out there and available for my future,” he noted.

Following high school, Mr. Exner received an Associate’s Degree in the Building Trades at Alfred State. There he spent his senior year focusing on masonry and drywall, while learning multiple certifications including OSHA 10 and OSHA 30. Following graduation in 2015, he worked at the barracks for the Army Corps of Engineers.

Today Mr. Exner has settled in with Advance Testing Co., of Campbell Hall, NY, earning his ACI and other certifications through the company. His job includes testing moisture density, soil and concrete, and masonry inspection.

Now residing in the hamlet of Woodbourne, NY in Sullivan County, Mr. Exner’s job takes him traveling from job site to job site throughout the downstate region, which he enjoys.

“I’ve been onsite at the new Montreign Casino in Kiamesha Lake and Krutcher’s Hotel in Monticello. I travel from Poughkeepsie to New Jersey to New York City, depending on what’s needed for the job at hand.”

On a particularly co 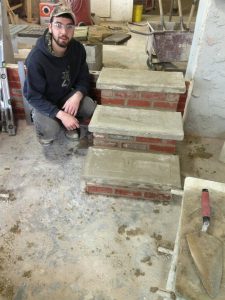 ld and windy day in Middletown just before Christmas, Mr. Exner was working outside at a Texas Roadhouse. However, despite the elements, he said he’s happy with his career choice; he’s earning a good living with his hands, and he is still learning and growing into his career. His foresight back in high school, his willingness to apply himself when he recognized his passion, and that eureka moment—attending Construction Career Day in Rockland—pulled it all together for him. Mr. Exner is building a life with a solid future. Not a bad view from the tree house that started it all.