No two scaffolds are alike. So building scaffolds, such as the ones German Lanzetta erected recently at the building site of the CPV Valley Energy Center, are often some of the most interesting aspects of his work, the young union carpenter told CONSTRUCTION NEWS.

German, who recently advanced from apprentice to journeyman, explained that some projects 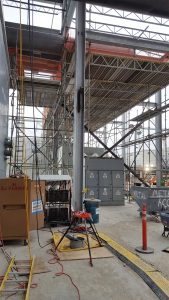 requiring wood are now designed of metal or other materials. His current work site is the 680 megawatt natural gas-fueled combined-cycle electric generation facility under construction in Wawayanda, in Orange County.

“The projects can range from form molding, concrete, framing, scaffolding and roofing—as well as flooring or using sheet rock—to more detailed jobs like welding or installing crown molding, and that’s just a few,” German explained. “This job taught me to design, build and execute proper and safe scaffolding with different systems. It’s one of the things I would like to teach in the future.”

One of his insights into the world of carpentry as a career came years ago when he attended the Construction Career Expo at Rockland Community College. The morning-long exposition, usually held in early April, introduces hundreds of high school students each year to the career opportunities in the Union Building Trades—which along with employers like the Construction Industry Council and the Building Contractors Association has sponsored the program since 2000.

As he sees it, “A union carpenter is a well-rounded professional, trained to be

able to perform any task, including the ability to read blueprints.”

Now a member of the Northeast Regional Council of Carpenters (NRCC), one of the largest trade unions on the East Coast, German recalled that he always loved working with his hands and decided to take a woodworking class. Observing his talent, the instructor, a former carpenter himself, encouraged German to apply for the New York State Carpenter Apprentice Program. He was accepted in 2012 and found the program was “a great opportunity to get the needed training to understand all the tasks a professional union carpenter can perform.” He graduated from the multi-year program in July, and he now extols the opportunities offered, from schooling, training and apprenticeship, to the hands-on experience working with and learning from journeymen on various jobs.

Entering NRCC at the age of 35, German’s first job was building the Fairway Market store in Nanuet in Rockland County. As most first-year apprentices, he worked on much of the insulation.

“My favorite project, but also the most challenging to date, was the River Building at Grace Farms in New Canaan, CT,” German recalled. “When seen from above, the building looks like a river. It’s an amazing design, everything was built from wood with incredible detail. Everything was curved, no squared edges. Even the glass was bent. That’s what made it both challenging and beautiful.” Grace Farms later won the Chicago Athenaeum International Architecture Award. 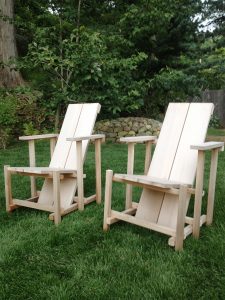 is work and seriously focusing on a career in the construction industry, the 39-year-old native of Argentina moved to the Hudson Valley five years ago to marry his high school sweetheart. They recently put down solid roots in Greenwood Lake, NY, but they still love to travel. In his spare time, German enjoys designing and building furniture that showcases his keen interest in creative craft work.

“I’m looking forward to more of these challenging projects, where you have to think and plan. I’m sure my skills will lead me to the type of work that’s detail-driven. My goal is to lead the team that goes in to do the finishing work.”