SUFFERN, NY—These days, despite a hectic schedule, Hector Agustin feels lucky. While a student at Rockland County BOCES, his talent, focus and penchant for hard work caught the eye of his carpentry teacher Eric Kurz, now assistant principal of the Career and Tech Center at the 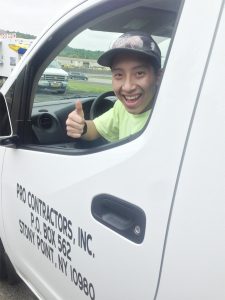 At the time, the International Brotherhood of Carpenters Union Local 279 had openings, and Mr. Kurz suggested Hector take the entrance exams, which includes a challenging math test. Hector’s proficiency won him a spot in the Local, which in turn landed him his first job with Pro Contractors, Inc., a West Nyack firm. It was, and still is, a good fit and the 22-year-old journeyman is happy to be growing with the company.

“I loved math,” Hector recalled recently on his way home after working a night shift on the open remodeling of Hollister Co., the clothing chain retailer located at 668 Fifth Avenue in Manhattan. “It was the only class where I earned an A. It was work where you got involved to solve a problem. I really liked that.”

With good math skills an important part of his skill set, Hector flirted with the idea of architecture as a career. Then one day in late spring 2013, he attended as a high school student a Construction Career Day sponsored by the Construction Industry Council, staged at Rockland Community College in Suffern, to learn about possible careers in the building trades. It opened up a niche he hadn’t considered.

“It’s hands-on work,” the Suffern native explained. “Every job is different with its own challenges to solve. I feel I get a lot of learning opportunities working for Pro Contractors. It’s taught me many things, like showing up on time, having a good attitude and to be a productive person. At first I really didn’t think about it. I just fell into carpentry.”

Thanks to Mr. Kurz and Dennis Yorke, training coordinator of Northeast Carpenters Apprenticeship Fund, Hector has taken the first steps of a career he’s passionate about and enjoys each working day.

“In three years of apprentice training he never missed a day,” Mr. Yorke recalled. “He came in straight out of high school. Now he’s 22 and at 50 he’ll have a good retirement pension and annuity, and the support of the Local.”

Getting into the Union in the summer of 2013 was a lucky break (he’s been told many times), as those slots don’t always open up when first timers are looking for jobs and the support that a Building Trades Local provides.

Now hoping to buy his first house, Hector’s advice to anyone considering carpentry as a career is to first and foremost take it seriously.

“They should know the importance of this work,” he said. “Everywhere people go, everywhere they work, and everywhere they live, those places are built by carpenters. The world would literally not be what it is without us. We literally built and continue to build this country.”