Following His Family Tree, But Growing His Own Roots

Years ago, when Matt Katkocin’s father saw his son’s report cards he did more than beam over the good grades, he pointed him on a career path that he knew would be both challenging and rewarding.  “My dad pushed me into civil engineering because he thought it would be a good fit for me,” Matt recalled. “I had always wanted to be a mechanic or a builder. The trades fascinated me since I was a young child.” 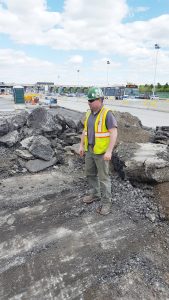 Matt’s interest did not fall far from the family tree given the fact that both his grandfathers were union tradesmen. In high school, Matt began working as an assistant to various tradesmen and mechanics, and he continued along that pathway through college as a laborer for small construction companies. “I was essentially learning the industry from the bottom up,” he recalled. “Since an early age I was always interested in construction and engineering…how things are made and how they function.”

A graduate of Manhattan College in 2000, with a BS in Civil Engineering, and a member of CHI Epsilon (National Honor Society), Matt continued his education with a Master’s Degree in Construction Management from NYU-Polytechnic University in 2012. That same year Jay Martino, a board member of the Construction Advancement Institute of Westchester & Mid-Hudson, Inc., sponsored Matt for a CAI career grant, which awarded him $3,000 towards his education in the industry.

He is currently a member of the National Honor Society of Engineers, and he is a project manager/superintendent at Halmar International LLC.  Matt looks forward to the work he’s doing every day, scheduling, coordinating and executing work on individual projects. Recent projects include his work on the Overhead Tolling Project at the Whitestone Bridge, the Bundled Bridges project for NYSDOT in Columbia and Dutchess counties, and a Metro North bridge in Putnam County.

Matt’s favorite projects include the challenges of work on the Tower 2 foundation at the World Trade Center, the 50th Street MTA vent shaft, LaGuardia Airport rehabilitation, work on the Robert F. Kennedy (formerly the Triborough) Bridge, and a project for the New York City Department of Environmental Protection that connects the Catskill and Delaware aqueducts. There were also smaller ones that he enjoyed for their unique requirements.

One involved a train bridge along the Hudson River for Metro North, he explained. “It was complicated, but rewarding, as we replaced 400 feet of railroad bridge over the Croton River in just months. “I have to say my father was right and I’m very happy with my career choice,” said the resident of Connecticut and now a father himself. He has three sons and another on the way. His favorite time away from work is spent with his wife and family, fishing with his boys and working on his own house.

Today, Matt sees his career progressing toward more challenging and interesting projects. His roots are certainly growing deeper by the day into engineering and construction. “I see my role in the industry expanding to continue in the construction sector, with greater responsibility and larger and more complex projects. My goals are to continue working on different types of projects and staying up-to-date on new construction techniques and processes as they develop,” he said.