VALHALLA, NY—Reviewing plans and contracts in his office at Piazza, Inc., Joe Piazza’s path away from his degree in finance from Ithaca College seems to have worked out just fine. The 25-year-old from South Salem, NY landed a job as an estimator/project manager at his father’s 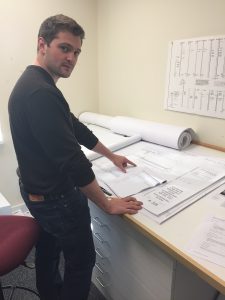 “I’ve been interested in construction since I was a child,” Joe said recently. “My entire life I wanted to be just like my dad and become a general contractor.”

However, while construction was his first love, it was also his only work experience, so directly after college the graduate felt some experimentation was in order. He tried finance and app development, but discovered after a year what he had believed all along: that it wasn’t his true calling.

“At the end of each day I’d see a bunch of numbers on a screen and it was not very fulfilling, so I decided to go back to what I know best,” he explained.  “I’ve spent my life so far building things and there is no better feeling than looking at what you constructed at the end of a long day. It’s extremely satisfying to see a completed project.”

Joe revised his passion for construction and decided to pursue the field of engineering, which he considered closest to his father’s profession. Joe’s father, Nick Piazza, is the owner of his namesake company, a member of the Building Contractors Association of Westchester & Mid-Hudson Region, Inc. As a general contractor, Piazza, Inc., concentrates on commercial and municipal construction. It was a company that would advance Joe’s education and development.

“I also thought learning things from an engineer’s perspective would be extremely useful once I became a general contractor,” he added.

Currently studying construction management at the General Society for Mechanics and Tradesmen of the City of New York. Joe will graduate at the end of the term, and he hopes to continue his education—which benefitted from three annual college grants awarded in 2010-2012 by the advocacy wing of the BCA, the Construction Advancement Institute—to excel in construction and improve his work at Piazza, Inc.

“My goal has always been to grow the company to new levels. My experience as an intern at Woodard & Curran (an engineering firm specializing in water and environmental issues) in White Plains taught me a lot about the engineering side of construction, especially the design process,” he noted. “It taught me how to reorganize and reorient my way of thinking. The auto CAD and Excel skills I learned in that office, along with the knowledge of how buildings are actually designed, has been an invaluable tool.”

The challenges of the workload and time sensitive deadlines presented each day fuels Joe’s interest.

“Everyone here wears a lot of different hats,” he explained. “No one person can be linked to a certain job title. I get to do a number of different things and because of that I am learning more than I ever thought possible.  I plan on staying at Piazza, Inc. for a very long time.”